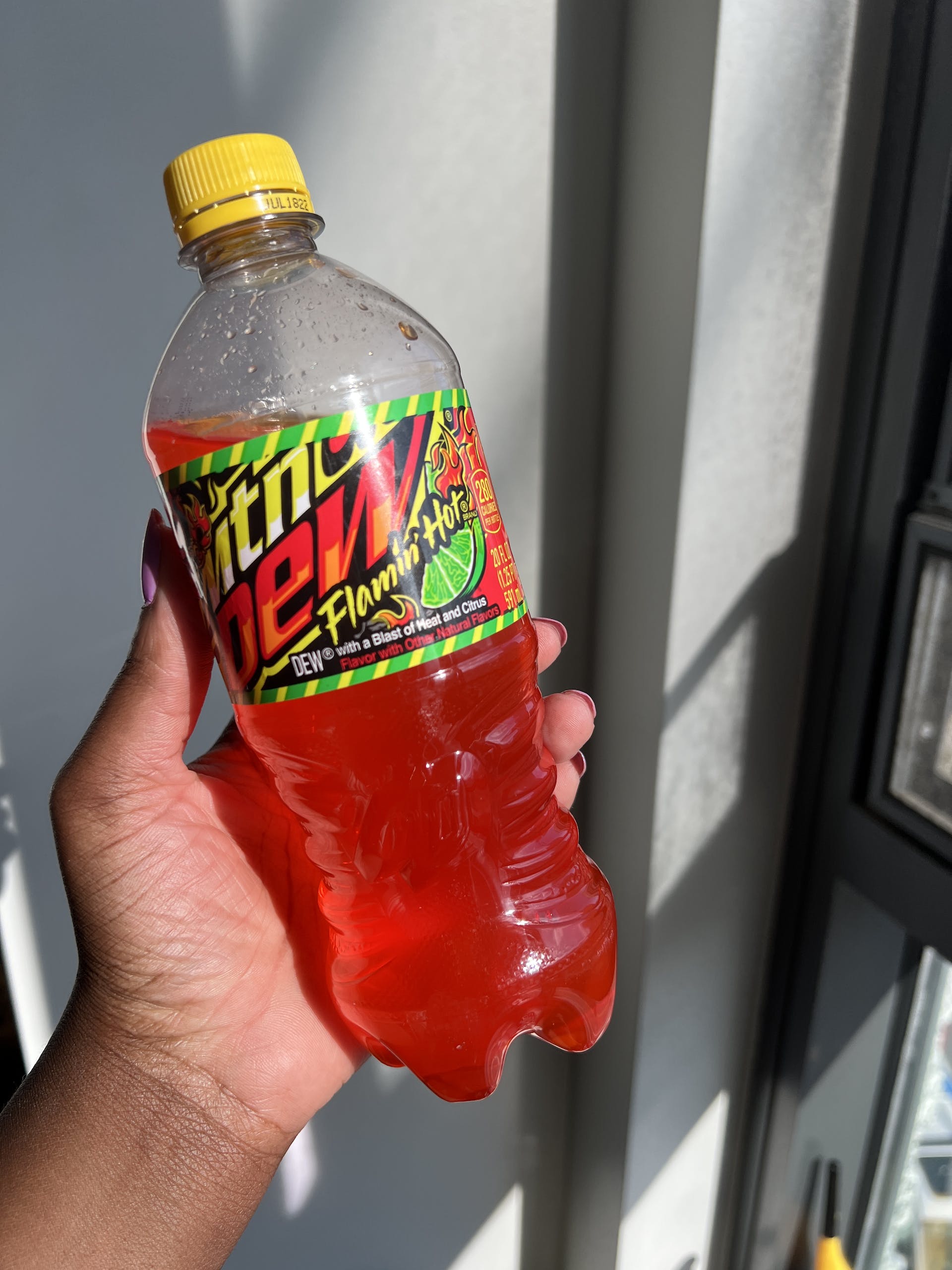 Welcome to unsnackable. This free newsletter is a minor tantrum about international snacks, beverages and fast food that I want but cannot have with occasional diatribes about other snacks that I can’t get off my mind.

I appreciate everyone who reads, shares, and subscribes to this newsletter. It is ad-free because of the support of readers like you. If you would like to support unsnackable with a paid subscription for $5/month or $50/year, please click below.

The first lipstick I ever wore doesn't exist anymore. A powdery Fuschia from Tarte dabbed onto my lips in the bathroom of an LES bar in my early 20s. It was an attempt to undo the damage from sprinting out of work and jumping on a very cheap Bolt bus (or maybe one of the Fung Wahs that didn't catch on fire) and kicked off yet another weekend spent with friends I only knew because of the internet.

Back then, I spent a lot of time logged in and just enough time on dreadful bus rides to ensure that my inner life (and my dashboard) bore some resemblance to my reality. But it wasn't until that era ended that I started wearing makeup regularly. I held no ill will toward full glam before that; I was merely beautiful, a bit lazy and too busy maintaining the neural pathways that allowed me to tell Gemma Ward & Sasha Pivovarova apart. I'll be compassionate and grade my laziness on a curve because it wasn't easy to find makeup that catered to my dark skin tone.

The ratios have now flipped, with beauty holding more space on my social feeds and in my brain than fashion, leaving me lodged in the beautytok dopamine loop. It's rife with nostalgia. I'm surprised to feel any ownership towards. How do I know so much deep lore from a world I was never considered a part of? Why could I recognize homemade dream matte mousse when I bought foundation for the first time the year after it was discontinued? Why did my life flash before my eyes with memories of Lime Crime's drama because their newest collection resembles a Chinese indie brand I've been coveting when I was only devoted to clear gloss when the drama was happening IRL? If deja vu is just your brain categorizing short-term memories as long-term, what is it called when your brain built a world for a hobby you didn't know you cared about until years later?

It is an intoxicating osmosis that feels especially resonant today on the eve of an outstanding candy sale (also known as Halloween). I have no costume and would rather self-immolate than step into a bar tonight. Yet, I'm deeply charmed by all of the family photos punctuated by the return of the coveted Mcdonald's trick-or-treat pails. If a trick-or-treater rang my bell tonight, I would have nothing to offer, but I can provide you with the special treat of another dispatch of theoretically accessible snacks. Straight from the corn-subsidy-diaspora, more commonly known as American Grocery Stores, please enjoy these snackables

If the prevailing sensation of Fruit Stripe gum is yearning for more after a momentary deluge of flavor, these gummies are the exact inverse. The aroma invites you in, but the offputting chemical taste makes you tap out. I tried a few pieces and double-checked on the package that they weren't expired.

Disappointing coffee and soda, like they took the La Croix approach to flavor. I was hoping for something polarizing and punchy, worth the gastrointestinal danger of combining acidic coffee and citrus.

I thrive on novelty, so very few snacks earn a recurring spot on my grocery list, but these always end up in my cart. There's a slight fluffiness to the texture, like a good sorbet made with airy egg whites, but they're made with juice and a stunning array of gums and stabilizers instead

These were a boon to my millennial quest to heal the damage the 90s levied upon my ability to view rice cakes as a neutral food. I accidentally left half a bag at the bottom of my beach tote, fished them out late at night weeks later (still crisp) and proceeded to make quick work of the leftovers.

Filled licorice is one of the best types of candy, but I'm deeply disappointed that they're gaining market share off the back of SweetTarts Ropes, a candy that barely rises above mediocrity. These do the same.

The ratios of these ice cream bars don't add up. The ice cream is bright and creamy, and the pocket of jam is a nice touch, but the outer shell is far too thick and tastes like almond bark.

I sink into deeply hydrated regret every time I drink plain coconut water. I prefer pairing it with more robust flavors like matcha in a tall glass with a ton of ice. After paying exactly USD $ 2 Million for a can of this at the airport, I only felt regret from chugging it before boarding because the seatbelt light didn't turn on until an hour after takeoff. I nearly died

These reminded me of jello jigglers (derogatory)

I ride for wafer cookies even though they have a shelf life of 30 seconds and occasionally end up stale before they're even opened. They are categorically some of my favorite cookies. This bite-sized version somehow made them better with crispy bits of topping and an artificial strawberry flavor that my brain interprets as happiness.

Filed away in the "I think about this a lot" folder of my brain is the ascendant but very famous DJ/producer Marshmello's team paying someone to wear his signature disguise and compete on American Ninja Warrior in 2018. It was a stunningly weird bit of album promo that forced me to explain EDM to my parents (unsuccessfully). This flavor made much more sense than that explanation and all of Coke's recent forays into limited-edition beverages, just fruitiness without the looming note of cola.

These have been a hot commodity for months in the rare snack market, with the same resellers marking up import sodas to $10 a bottle, treating them like they were an inaccessible grail. I just stumbled upon a pack at the dollar store. I was immediately humbled by how much they bang, despite staining your fingers, mouth, and teeth when you eat them. Warheads creating the most unctuous gumdrop/sugared jelly candy I've ever tried is not something that I anticipated.

The perfect form of Sprite is discovering a can left at the back of your fridge after ordering it to hit a delivery minimum on takeout and chugging in your time of need (hungover?) The second best form is the limited edition Sprite Ginger flavor, a union of the two most healing beverages in American GPG. I thought this would be a contender for the third place, but the Lymonade lacked the necessary punchiness to "ade" in any strong feeling.

It is deeply midwestern, but my pinnacle of ice cream will always be rich and custardy with a high milk-fat percentage and an eggy base to give it body. My ideal serving is a heaped spoonful straight from the freezer, melting slowly on my tongue as it coats every tastebud. This is the first time I've tasted an ice cream flavor and thought, "Damn, this base must be an absolute terror to temper" because it was just missing a water bath and an oven to make it a creme brulee.

Not sure if it is supply chain issues or innovation fatigue, but it seems like this was a dud year for Halloween candy releases. I'm able to cope because my favorite new candy from last year, less of a traditional candy corn and more of a soft chew with modified nerds shell, is back. This is what I'll make a beeline for when I clean out the confectionary clearance tomorrow.

This tastes like a resurrected Pinkberry flavor with the texture of premium ice cream. Like Aughts nostalgia you can eat by the scoop.

Snapple moved away from glass bottles and severed my relationship with the brand; it's merely a juice that never hits the spot now. I gave it another chance for a reboot of the iconic aughts elements beverages, but there was nothing that pulled me back into caring about Snapple. Air was close because pear is an underutilized flavor and even rarer when it isn't viscous nectar or a smoothie.

I mourn Milk Bar sometimes, not because I miss the treats themselves but because Tosi is the most significant influence on the techniques I use when building the flavor profile and textures for a dessert. The current Milk Bar empire and the products therein are primary sources of disappointment, those shelf-stable supermarket cookies are a scourge, but many people assured me the ice cream was different. They were right; this was a textural marvel! The mix-ins stood out beyond the base, and the cereal mix-ins were crunchy and well-distributed.

I'm haunted mainly by how subtle this was. If you're going to make something weird and unsettling, why not swing for the fences?

Mountain Dew boldly asserted that Summer '22 would be the Summer of Baja, but I don't think they were able to bring it to fruition. They released two new flavors of Baja Blast that pale in comparison to the original and hid a promotion that qualified you to order a third in the fine print (there were codes in the caps that you could enter online, but few people knew about it)

Out of sherbet's many meanings, the flavor of this soda manages to nail two of them in a single soda- sherbet (the American frozen fruit juice and cream confection) and sherbet (the U.K. fizzy candy powder). I wouldn't repurchase it, but I enjoyed it all the same.

I’m still figuring this out, but hopefully, you enjoyed v.63 of unsnackable.

If you didn’t please don’t tell me, tell your friends to subscribe because they hopefully have better taste than you.

Think you’ll miss me before unsnackable v.64 comes to your inbox? follow me on other parts of the internet and tell me about what you’re snacking on

I’ll try any snack at least once, so don’t be shy if there is something you want to send me to try.

I like sending something nice to your inboxes for free, but if you’d like to support my snack related endeavors you can upgrade to a paid subscription for just $5/month or $50/year. Or you can support my efforts directly or send me a token of appreciation through venmo or paypal. Your support helps to keep this ad-free newsletter running!